One Year with Origami Paddler 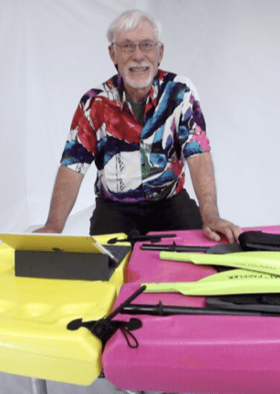 Just this past week, Origami Paddler celebrated the one year anniversary of its Kickstarter Campaign! A few years prior, our fearless leader, Tim Niemier, had an idea - a million-dollar, billion butt idea. He was brave enough to attempt it once before but we began this particular Origami Paddler journey just one year ago. In the middle of a health pandemic… call us crazy!

We believed in Tim and in the idea of the Origami Paddler. Last July, we started crowdfunding - asking the public to join in and dream of a billion butts in boats right along with us.

By September of 2020, Origami Paddler had raised 3.8 Million dollars on Kickstarter allowing us to hire a team, create molds, find manufacturing and production partners, and everything else that comes along with a new business and a new product. We were blown away by the support and even broke the record for the most successful watercraft campaign on Kickstarter. Sometimes we still need a pinch to believe it's real!

We say it often but we mean it sincerely - THANK YOU for your continued support. This dream is alive because of every single one of you. We will never stop working to ensure that you get a quality product and that you feel the Origami love, all the time!